Norway, the land of the midnight sun.

At more than 385,000 square kilometres, claiming some portions of the arctic circle, Norway could fit 535 Singapores and but is home to only 5.2 million people. With the vast landscape and so many unique places to see, we had a difficult time choosing where and how to spend 10 short days: see Svalbard polar bears before they become extinct, travel the fjords, trek in national parks, or experience the magical lofoten?

Decisions were so difficult to make, we ended up making a lot of last minute changes to our itinerary (like buying a ticket to Lofoten 2 days before the trip) and changing our routes while on the road. At the end of the day, we were able to see and do a fair bit in our 10 days in Norway, and not feel terribly rushed. Here’s a snippet of what our journey to Norway.

The landscapes at Lofoten are beautiful beyond imagination. Spectacular mountains that fall into the Norwegian Sea. No cities, only quaint villages that dapple the coast lines with glorious mountains in the backdrop.
There are a few ways to enter Lofoten, by land, sea, and air. We decided to fly to Bodø and take a boat across to Moskenes. From there, one can take busses or boats to get around if you don’t want to rent a car. The islands are long and narrow, with only one main highway that stretches across.

On our first morning there, we visited the village of Reine. Just as we got there, the rain had heeded, giving way to still waters and a beautiful rainbow. The view is as if its from a fairy tale, with small houses sitting along an idyllic lake. Since it was the end of summer, there was no snow to be seen, but the landscape was covered in lush green. 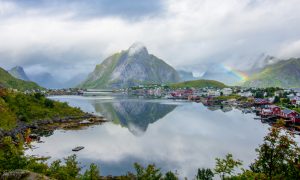 From Reine, there is a popular trail to Reinebrigen, but the trail is in such dire conditions that we gave up and turned back halfway. There were multiple trail marks with no proper signages, and most of the trails have eroded into mudslides. Not a good trail for safety reasons, and also for the environment. However, the landscape still offers a lot to admire, with colorful flowers that cover the slopes. 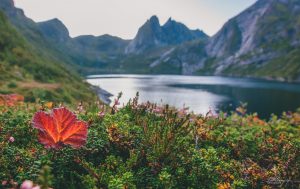 The KP readings on the aurora forecast was around 4 the nights we were there, meaning that there was a chance that we could see the northern lights. This encouraged us to take the trip further up north to get a better chance. The scenery on the road changes at every turn, encouraging us to stop every once in a while to take it in. On the way, we also stocked up food at their grocery stores, which are available every 20-minutes or so.

Near Leknes is Uttakleiv beach, where we spent our second night. It was pretty cloudy, which gave rise to a beautiful sunset, but no view of the skies that night. The beach was a perfect camping spot, and relatively quiet. Unfortunately, our plan to hike Himmeltindan the next morning was stopped short due to heavy downpour. The only thing certain about Lofoten – it’s uncertain weather. 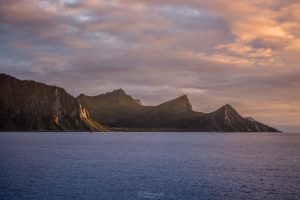 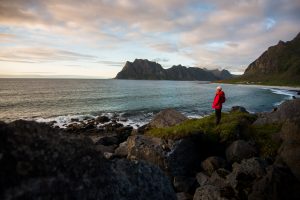 We moved up as far north as Henningsvaer, where we hiked Festvågtinden, a considerably easy trail. It takes around 3 hours round trip. On a clear day, the view of the entire islands can be seen! 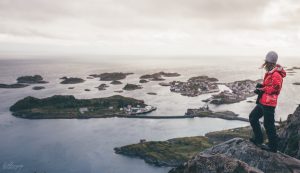 On the way back towards Moskenes, we stopped by a few of the towns and villages. Most of them were very quiet, we hardly saw the local people. We particularly enjoyed Nusfjord and Hamnøy – two small villages that had a certain charm to them. The buildings in those villages retained the uniform red house structures that sat on stilts above the waters. Most of the people in Lofoten were fishermen, and boasted of the seafood dishes. So, we decided to fork out $20 (USD) to try the Lofoten Fish Soup. It was our first Norwegian-made meal, at Anita’s Sjømat in Sarkisøya, a 10-minute drive from Reine – and it did not disappoint. 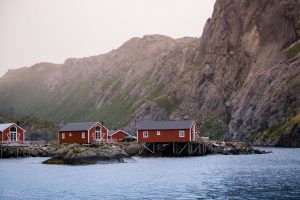 We were down to our last day in Lofoten and we had not yet seen the northern lights. That said, we came to Norway not expecting to see it this early in the year, but it would have been a real treat. After catching the sunset at Reine, we head to Moskenes campground to set camp. 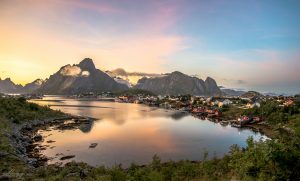 I left my heart in Lofoten…can you find it?

It was around 10pm when Sarah took a small peek outside the tent to see if it was dark enough to see some stars. That was when she saw a faint green streak along the horizon…there it was! The northern lights! We were thrilled.

We jumped out of our sleeping gear and took off, driving to somewhere we could get a better glimpse of the aurora. The first place on our list was Hamnøy – it looked magical. What a breathtaking sight to see. The first time there was a strong visible pulse of green light, we were both too ‘star-struck’ to take photos, and just stood there watching it move across the sky. From Hamnøy, we continued up north and stopped by a number of places before turning back. It was around 3am when we finally got back to camp, with just enough time for a 2 hour nap before catching the ferry back to Bodø. But it was completely worth it. 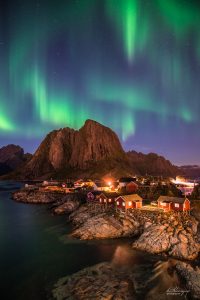 Jet stream of green at Flakstad 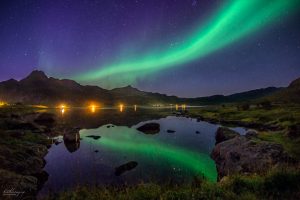 Reflections of the Northern lights above Flakstad

Lofoten Islands was truly an amazing experience. Though it by no means was a ‘wilderness’ adventure, the place offered a lot of quiet and serenity. However, I must note that the beauty of Lofoten may not remain the same in the future. There is a political debate happening now on the subject of oil drilling in Norway, with Lofoten being one of the possible locations (article here). It is a stark reminder that even though these places look untouchable, the daily things we do in life does have an impact on how we treat the physical environment.

So, make wise decisions and hopefully we will all be able to enjoy places like Lofoten Islands in years to come!