Back for my second visit to the island of Cebu this year! Decided to head to the southern part of Cebu, for an action-packed 4 days with the family. It is nearing Summer (24-27 May), so the temperatures are highest, but also with sun all around. We avoided the peak of Summer (June & July) as it has the highest amount of rain. This itinerary is not for the faint-hearted, but very doable for families with children over 10 years of age (tried and tested!) Got to play around more with the GoPro Hero 5 as well, since most of these activities involved getting into the water. To see more of photographs from Philippines, check out this gallery.
Algeria, Badian
We arrived in Cebu-Mactan airport around 2am, where we had a taxi driver arranged to bring us to our accommodation. It was a bumpy 3-hour ride down south to Algeria, and my brother and I were lying in the trunk of the car as there weren’t enough seats for the 6 of us. At least we got to lie down, so hardly any complaints. By the time we reached our accommodations around 5am, the sun had already begun to rise, hitting the mountaintops with a orange-golden glow. It was a perfect welcoming sight. 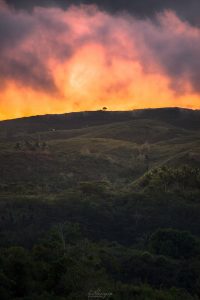 Stay
We booked our accommodations at Sun Xi Mountain Resort through Airbnb, and fell in love with the place. Situated high on the mountains (2,200m elevation), it has a breathtaking view of the surrounding farms and forests. We woke up at 5am both days we were there, just to see the sun rise upon the vast landscape. Although the temperature in May is around 27-33 Celsius in town, the cool mountains were somewhere around 25 degrees or less at night – perfect weather for relaxing and taking in the view. 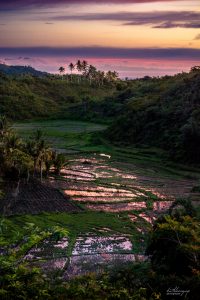 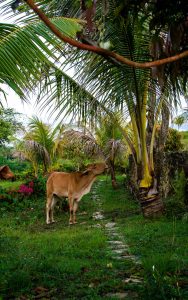 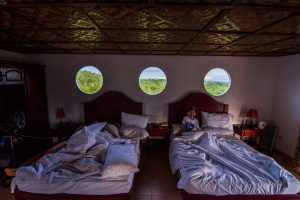 We were able to get to a number of waterfalls in Badian from the mountain resort, all arranged for us by our host, Tash. During our two days there, we visited two falls: Cambais falls and Kawasan Falls, of which the latter involved canyoneering activities.
Cambais Falls
One of the less touristed waterfalls in the same vicinity as Montpellier falls. There were a number of locals visiting the falls when we were there, young and old – we were probably the only non-locals at the falls. It was a lively scene, with kids jumping off of the waterfall rocks (including my parents). The water was cool and refreshing on a hot day, and pretty clean – we saw many villagers who live there use the river water to wash their clothes. 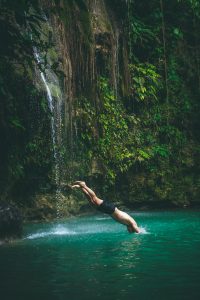 The falls don’t make it to one of my favorites, due to the crowd and lack of grandeur of the falls, but still a great place to visit with kids as the trek is very manageable and the falls have small pools for kids to wade around. My younger siblings were very intrigued with catching small fish in the pools. 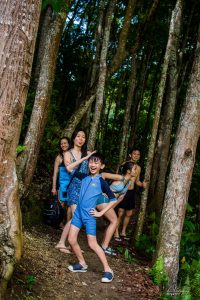 This is what happens when you ask them to turn around for a photograph – and no, I don’t teach them how to pose. Wooded forests along the trek out of Cambais Falls

Kawasan Falls & Canyoneering
A highlight of our trip: canyoneering down the rivers to Kawasan Falls.
Our guide Jestony brought us through a 3-hour adventure through the gorgeous canyons of the Abatan river, sliding and jumping off waterfalls big and small. The jumps range from 2m to 12m. Make sure you ask the guide for a run-down on landing if it’s your first rime! I did receive a bruise from a 6m fall because I wasnt prepared well. Of course, all the jumps are optional and there are rocks you can scale down on foot if you don’t feel comfortable doing it. My brother had no problems joining in, and there were many local children running around as well. 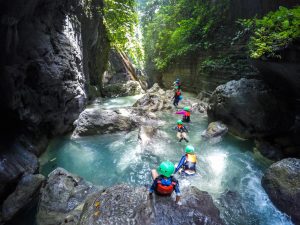 Making our way down the ravine (GoPro Hero 5) 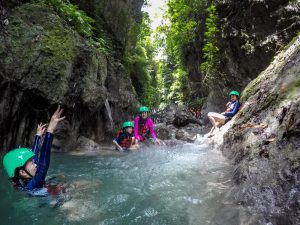 Family having a splashing good time in the refreshing water! (GoPro Hero 5)

But the real spectacle was the scenery…it was as if we were in Jurassic Park and dinosaurs were going to appear at any moment. The water was crystal clear blue, canyon walls draped with lush greenery, and there were even small caves with stalactites as we cruised along. 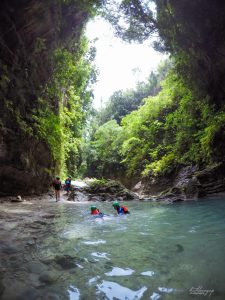 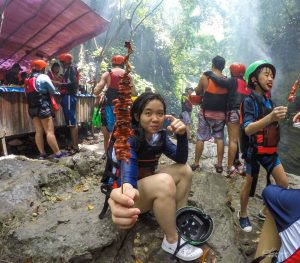 Needless to say, the entire family had a blast, and we are already looking forward to doing it again on our next return!
Food & Safety
The population is very small in Alegria, and it is not a tourist spot (most visitors to the kawasan falls do day trips from Cebu city). Most locals there live in villages and are farmers. There aren’t many restaurants (we counted 4) in the town – these are just areas that offer sit down dining – the rest are mostly street markets and street food. However, there are a number of bakeries! Our favorite was the one near the main market, at the base of the mountain to Sun Xi.
The only safety concern is on the road – the roads aren’t paved, so if you’re riding a bike, be careful. And if you’re a passenger with motion sickness, you have been warned. No street lights, so don’t wander at night, you will definitely trip on the road. Other than that, the streets are safe.
Moalboal
Sardines!
Another trip highlight was seeing the worlds second largest school of sardines – just a few meters off the southern coast of Moalboal. Our airbnb host hooked us up with her cousin who owned a boat to bring us to Pescador island, turtle bay, and to find the sardines. He picked us up right from our backyard (literally)! 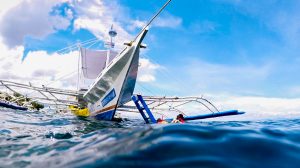 True to the reviews, Pescador island wasn’t much hype. We also happened to be there at high tide so the corals were quite far below and waters had a slight current. The corals at the coast of Moalboal are probably better than that of Pescador island, but you have to be willing to swim out a hundred or so meters. That also happens to be where the sardines usually hangout. We were so surprised to see them up at the shallows! What a glorious sight. 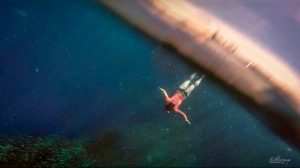 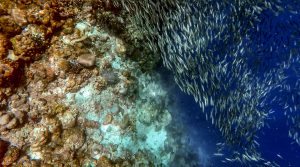 Turtle bay was further south. There werent many corals, but we got to witness 2 beautiful large hawksbill sea turtles. 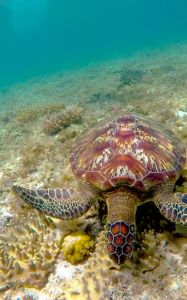 In all honesty, there is not much need to get onto a boat to snorkel at Moalboal. We were glad we had the boat to bring us to Turtle point – where there are higher incidences of turtles – but even then it is not necessary to go there just to see them. I actually got a glimpse of a turtle and the school of sardines just off the coast of where we stayed! 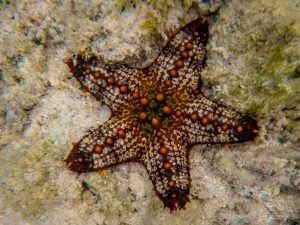 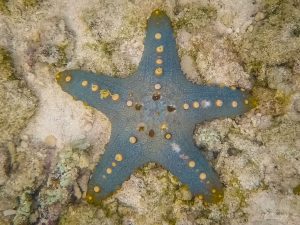 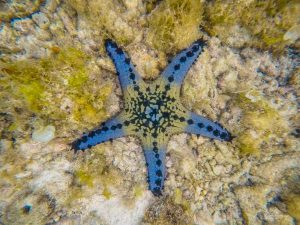 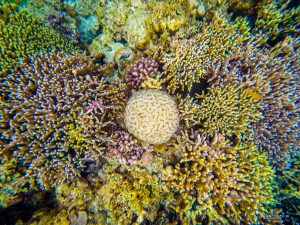 Food & Safety
Moalboal is a favorite tourist spot for divers, with one major street that is lined with resorts and restaurants. Lots of food options compared to the food desert of Alegria! The food is delicious, fresh, and inexpensive. We ate fish nearly every meal and it was some of the best I’ve ever had.
The town had a power and water outage one of the afternoons we were there, and according to the locals it occurs once every 2-3 weeks. It was a little inconvenient as we really needed a shower after coming out of the sea, but made do with pails and buckets to rinse off.
Similar to alegria, the street is poorly lit and paved, so be careful walking in the night. Other than that, it is safe to be outside. We met a Swedish lady who decided to extend her stay in Cebu (by 8 months, no less) and she commented that she could never walk in the streets of her home freely, unlike in Moalboal!
Til next year! ? 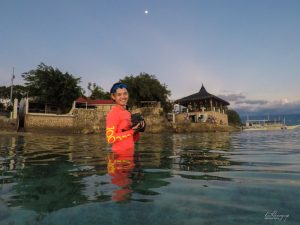 Taking in the sunset half submerged! Photo by my sister (GoPro Hero 5)

Want GPS points of the places we stayed/ visited, and contacts of local drivers, guides? Drop me a message!